​1.  The Hearing of the Local Planning Appeal Tribunal (LPAT) re the proposed Colacem cement plant near L’Orignal is due to start on November 9, 2020 at 10 a.m. Because of Covid-19 precautions, it appears that the hearing will be held by teleconference. This is understandable but unfortunate because the public will not be given an opportunity to show their opposition to the proposed cement plant.

The Vankleek Hill and District Nature Society has serious concerns that there has been not been a thorough environmental assessment into the impact of the plant, both locally and globally. Consequently, the Nature Society is opposed to the cement plant.
​
The Nature Society has undertaken such an environmental assessment and has incorporated its findings in a Participation Statement which has been submitted to LPAT and which will be presented at the Hearing. The submission is also available for reading on the Nature Society website, www.vankleekhillnaturesociety.org by clicking MORE…. on the top menu bar and then toggling down to ‘Cement Plant’.

The primary concern of the Nature Society is protecting the environment. If allowed to operate, the cement plant will be emitting approximately 18 tonnes of pollutants per day including fine dust, nitrogen oxides and sulphur dioxides. Some of these pollutants can cause an extremely high risk of acid rain to fall on our forests, rivers, wetlands, fields, and wildlife.

There are important ecosystems in our region which support an abundance of plant life, animals, fish, native birds, and migratory birds. These sites will be affected by the cement plant. The Ottawa River is only 2 kilometres from the quarry and site of the proposed cement plant (see photo) and may be contaminated by runoff from the plant.

There will be over 2000 tonnes of carbon dioxide emitted from the stack of the proposed cement plant each day. It is known that carbon dioxide is the major contributor to climate change. Climate change is one of the greatest challenges facing mankind in this century, but the developer of the cement plant does not include an assessment of what 50 years of greenhouse gas emissions can do to climate change and to global warming.

Although the mandate of the Nature Society is to promote the conservation of nature and its resources, there are also human and economic factors related to the cement plant. These include: the effect of air pollution on health; the large increase of heavy truck traffic on the highway to Montreal where most of the cement will be exported; the negative effect on our agricultural and tourism industry; the economic impact of the carbon tax, which will be paid mainly by the public.

Currently there are 16 cement plants operating in Canada, apparently at less than full capacity. Do we need another plant? The proposed cement plant would pollute our region, yet the cement would be mainly exported.

Based on our environmental assessment, we believe that there is a strong case for not building the Colacem Cement Plant in this historic and agriculturally rich area of Ontario. 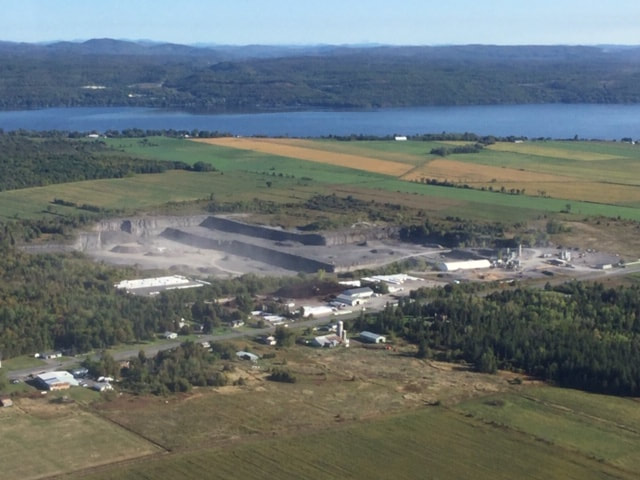 ​The quarry and site of the proposed cement plant showing the Ottawa River in the background.
​​
​2.  Extract from the Participant's Statement